Signage: instructions for use

Signage: instructions for use

Because finding your way around La Défense was very difficult, signage was redesigned in 2011. Paris La Défense approached the change in a spirit of responsibility. Being the leading European business district creates demands on all stakeholders. First and foremost among them are the usual users, businesses and residents, but also tourists and occasional visitors. We are going to begin to meet these requirements in terms of mobility and comfort of travel for everyone.

Because signage is more than just pictograms or numbers****.

This construction site under the sign of ambition. Being exemplary, in concrete terms, means above all: keeping it simple. Avoid, for example, that district 12 is the exact opposite of district 11. It also means being efficient. Listening to you - that was the purpose of the broad public consultation - and taking action, making a commitment...

Three "stages" have been completed: firstly, pedestrian signs (put in place in autumn 2010), then street signs (January-March 2011) and finally road signs (second quarter 2011). Listening to you, knowing where improvements can be made: your feedback is necessary so that this signage is more than just La Défense's signage, but your signage.

However, should you encounter temporary difficulties in finding your way around, please do not hesitate to contact us at the following address: communication@parisladefense.com

To locate, to orient oneself, simply

No more numbers, just names. This is one of the principles of the signage introduced in 2011, which is based on names already clearly identified (squares, car parks) such as "Reflets" or "Coupole". How to use the new tools.

! When you come to La Défense, first use the general map to locate in which sector/neighbourhood your destination is located.

Then, let the new supports guide you. Masts, sector or overall plans will be the new landmarks to help you find your way around simply and easily. They are high and more visible, and will clearly display the location and orientation. Thanks to the colour coding, it will be possible to know immediately in which sector you are located.

Neighbourhood names will be indicated in quotation marks.

A word of warning: return to normal and more concrete location 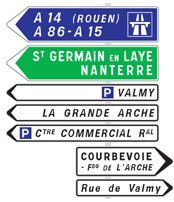 The numbering has been abandoned in favour of an orientation by car park; the districts are signposted from the circular boulevard, which remains the "royal road" for car traffic in La Défense. Our advice: if you don't know your destination district, head for the central car park.

Please note: the specific indications for deliveries and taxis have been removed, as these accesses are now on the traditional numbered roadway.

The figure: 22,900 public parking spaces are available in the business district.

As close as possible to urban and usage realities

In the beginning, there was a "historical" east/west orientation, now anchored in the Paris Region's imagination - and bounded by the two public transport stations. Then, the desire, to make the districts legible and memorable, to add a north/south axis (faithful to the major landmarks already in place and to the urban structure of the site) and thus create four sectors. Finally, the need, for both motorists and pedestrians, to evolve from a largely "theoretical", abstract signage to simple landmarks, the neighbourhoods, for living and working.

The circular boulevard structures access to the districts (via its car parks) for motorists. 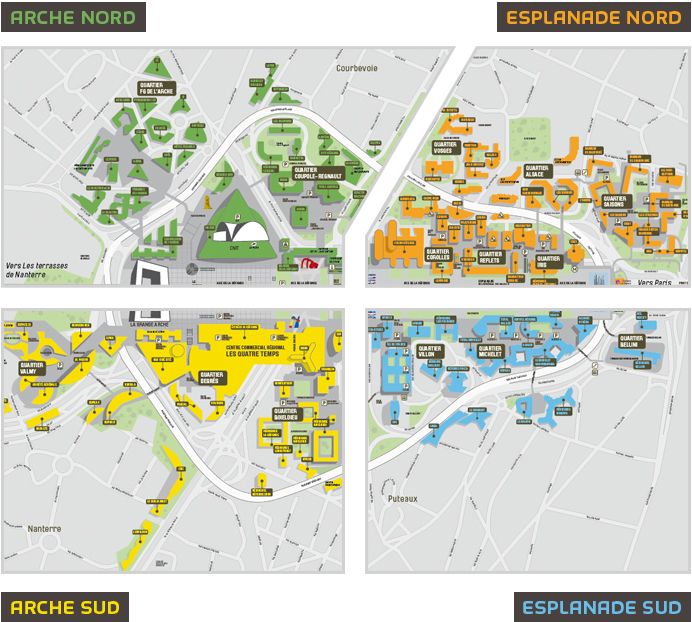 Introduced essentially for pedestrians, the intermediate level of marking of the "sector" is based on the major east/west axis of La Défense. Four in number, like the cardinal points, these sectors have names referring to the urban structure and the major landmarks of the site.

A return to the usual names

No more numbers, just names. Spread over the 4 sectors, the 14 districts of La Défense derive their names from historical and geographical usage, such as "Reflets" or "Coupole-Regnault".

On the pedestrian and road signs, they are always indicated in lower case and in quotation marks ("quartier").