An emblematic site for the French and international economy, Paris La Défense is one of the most important tertiary centres in Europe. It is a particularly sensitive site that poses complex security problems, particularly due to its atypical structure, based on a slab-based architecture model. The district is characterised, in particular, by its immediate proximity to Paris, a high concentration of people, the presence of a major road and rail junction, a complex distribution of competences and responsibilities, and the multiplicity and interdependence of the stakeholders and facilities. These particularities constitute as many constraints that must be taken into account in the framework of this plan.

The plan, approved in 2013, aims to promote better management of a major event at La Défense and aims to facilitate the action of the emergency services.

To this end, an alert scheme taking into account all the actors on the site has been adopted. The public management establishment of the district, Paris La Défense, has a special place in it.

Emergency access has been worked on in order to guarantee better access to the site for emergency services, while mitigating the impact on road traffic around the site.

Finally, the management of traffic flows has been rethought with the aim of facilitating the work of the emergency services and communication during a crisis has been clarified.

The PMSD, which is a specific ORSEC provision, has been regularly updated since then, following the civil security exercises that took place during the year.

The provisions of the plan can be implemented in the event of a disaster of accidental or intentional origin:

In the event of a major event on the La Défense site, the strategy to be adopted, a priori, will consist of triggering the most appropriate action for the event (evacuation, confinement or a combination of the two) in the sector or sectors affected.

In addition, the DOS in consultation with the COS will decide on the measures to be taken in the other sectors.

Evacuation means leaving the area located on the slab on foot, towards the communes located on the outskirts of the La Défense district (Puteaux, Courbevoie, Nanterre, Neuilly-sur-Seine). Under these conditions, it is impossible to consider taking public transport or your own vehicle. These actions would have the direct consequence of congestion of the entire neighbourhood and slow down the arrival of the emergency services.

Sheltering or confinement consists in staying in the building in which you are at the time of the alert.

The terrorist threat is the subject of a specific strategy, with the transmission of a reflexive act of sheltering, common to the whole district, even before the PMSD is triggered and without going through the prefecture.

Management of the alert

In the event of a major event on the La Défense site, the witnesses of the alert must notify :

For operational reasons, the sole recipients of the alert from the public authorities, via the authorities, via the Paris La Défense automatic alert system, are the security control rooms of the various establishments in the district, including the transport operators (RATP and SNCF). It is therefore their responsibility to report any change of contact details to the following address at the following address coordonnees-alerte@parisladefense.com

Note: While waiting for the first instructions, the owners, managers and employers of owners, managers and employers of Defence establishments are responsible for ensuring their safety, by virtue of articles 121-3 of the penal code, L721-1 of the internal security code and L4121-1 of the Labour Code, particularly in the case of establishments open to the public (Articles R123-2 et seq. of the Construction and Housing Code)

The circulation of information

As soon as the plan is triggered, the prefecture sends a message to activate the COD and activation of the PMSD to all the actors concerned by the event via the SIDPC's automatic alert system.

The town halls are in direct and regular contact with the Departmental Operations Centre to information and disseminate it.

The town halls are responsible for alerting the population by any appropriate means of communication and to relay the instructions for behaviour. Thus, it is notably possible to relay this information via :

A project for a public address system for key points on the slab is underway, led by the Paris La Défense public establishment. In the long term, this system will be able to broadcast an audible alarm as well as pre-recorded warning messages.

In the event of a terrorist attack

In the event of a terrorist attack, the kinetics of the event lead to the dissociation of the first instructions from the formal triggering of the PMSD.

This is why a single instruction in the event of a suspected terrorist attack has been decided: to shelter all sectors.

If a service (BSPP, SAMU, police station or Paris La Défense) has a cluster of clues suggesting that a terrorist attack is taking place at La Défense, it informs the PLD headquarters by telephone, which triggers the general sheltering procedure, by transmitting the corresponding message to the establishments in the district via their automatic alert system.

This procedure can be broken down as follows:

The role of facility managers

The managers of La Défense establishments (towers, shopping centres, car parks, multi-modal station, shops, crèches, schools, etc.) represent the end of the PMSD ALERT CHAIN. Their role is essential. They are the ones who will ensure the proper execution of the instructions transmitted by the authorities. This is why it is necessary for them to prepare for the crisis by the instructions locally, by informing their users and by training regularly. regularly.

Preparing for a major event

During a major event

Good reflexes in case of an alert at La Défense

If you are in a building in La Défense (e.g. a tower), confine yourself and keep away from windows. Under no circumstances should you try to leave the building you are in.

It is important not to try to get your vehicle back in order to avoid clogging the ring road, which is reserved for emergency vehicles.

The Traffic Management Plans provided for in the event of a major event on the Paris Plateau will be triggered by the police. They include a specific section dealing with the business district, the aim of which is to facilitate access to La Défense for emergency vehicles and to facilitate the transport of injured people to hospitals in the area.

People are asked not to use or join their vehicles.

In the event of a major event on the La Défense site, the Prefect, in consultation with the Emergency Operations Commander (COS), will decide on the measures to take (sheltering or evacuation).

Moreover, public transport may be completely stopped at first. You should therefore not try to join them in the event of an alert.

Depending on the event, traffic will gradually resume, after consultation with the COS, the Director of Emergency Operations and the transporters.

Reception and orientation of those involved by the municipalities

This consists in particular of opening places capable of receiving the people involved and not injured. involved and uninjured.

Psychological support will be set up with the help of the civil security associations and the Medical and Psychological Emergency Unit (CUMP) of the SAMU.

The above-mentioned civil security associations are stakeholders in this plan.

They take part, with the emergency services, in victim care operations.

In addition, they mobilise their volunteers to provide human, logistical and technical support to local authorities, particularly in the context of caring for the victims. 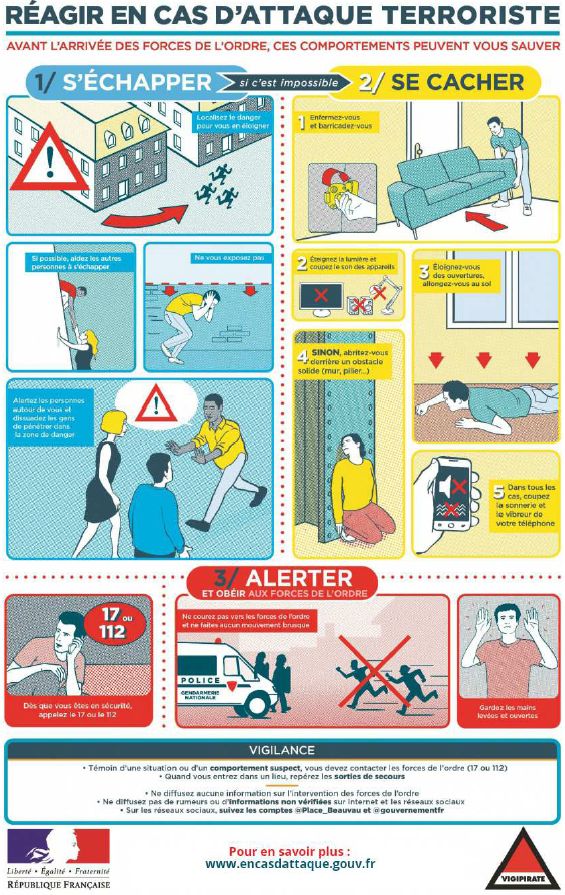