Paris La Défense is starting work on the emblematic and vast Place de La Défense at the beginning of March. In spring 2023, this will offer a 20,000 sq. metre space that has been completely redesigned and renovated. This letter presents the project and the construction methods.

Place de La Défense, the nerve centre of Europe's leading business district, was designed in the early 1970s. In its current configuration since 1981, the Place de La Défense needed to be given a new lease of life.

In addition to addressing important technical issues (notably waterproofing and flooring), this project reaffirms the identity of the square by giving it a more plant-like, tree-lined and fluid dimension, while maintaining its friendly and attractive appearance, and by relying in particular on two works of art, key elements of the square's décor: Calder's "Red Spider" and Miró's "Fantastic Characters".

The unification of the ground, the demolition of the steps, the creation of two lifts to the Centre car park and the lighting of the square will simplify and fluidify pedestrian traffic as well as that of people with reduced mobility, particularly at the exit of public transport.

Organisation of the works

The first works will be carried out in phases and sectors, starting with the peripheral areas of the square and ending with the central part. The first stage, from March to September 2021, will involve redesigning the northern area, on the side of the Maison de La Défense and Calder's Red Spider, as well as an area around the RATP glass roof. The phases will then follow one another for delivery in the spring of 2023. Once the areas are completed, they will be made fully accessible to the public.

You will find on the reverse side of this page the provisional phasing until March 2022..

During the works, traffic flow is maintained. Access to everyone, shops, equipment and offices on the square, as well as the major crossings, will be maintained as at present. With regard to access for people with reduced mobility, it should be noted that in some places the widths will be reduced (2.5 m along the facades, for example) but the slopes will comply with the regulations. After the works, the levelling was studied to maintain or improve the current accessibility and ensure that it complies with the regulations. Two new lifts will connect the square with the Centre car park in the basement.

The work will be carried out in three stages in each of the work zones:

In 2021, approximately 25 nights of work will be required. However, the majority of this work will not cause any noise pollution, with the exception of the demolition phase of the existing pavements, which may cause noise pollution, corresponding to less than 10 nights in 2021.

Our commitments for a low-noise worksite

If you have any questions about the project or the construction site, please contact us: vu@parisladefense.com 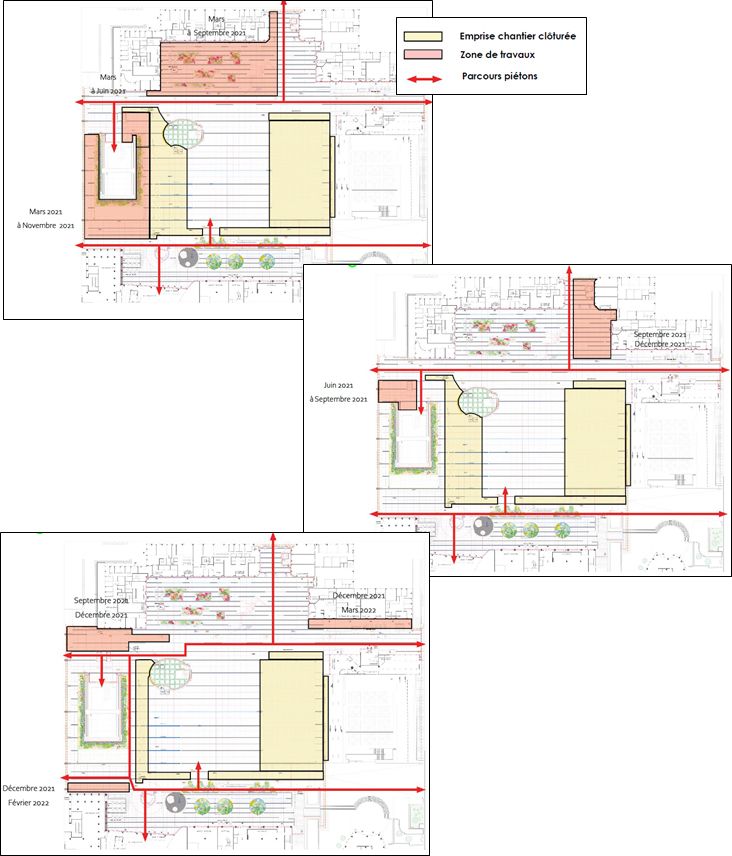 Three questions to Arnaud Dupré, in charge of the operation for Paris La Défense.

Will the new coverings be non-slip?

In order not to catch dirt and to be easier to maintain, the floors will be smooth. However, slip tests have been carried out and the floors comply with current regulations.

Will there still be seats left with the removal of some stone benches and mastaba?

Yes, part of Emile Aillaud's benches will be preserved. While the mastaba steps will be demolished to make it easier to move around the access to the metro, seats will be recreated on the edges of the planters installed in the new "living spaces" around the works of Calder and Miró, and an elliptical wooden bench will be installed at the level of the "medallion".

What happens to the works?

Calder's Red Spider and Miró's Fantastic Characters are the identity of the Square, and the works will be enhanced by the nearby green spaces. Christine O'Loughlin's Arc Déplacé is not retained in the development project to meet the wishes of the artist who did not wish to reintegrate her work into the lawn. There are currently no plans to install a new work in this area. Fabio Riéti's The Face cannot be preserved. Indeed, in order to install the new lift battery that will enable the Indigo car park to be reached, the work must be removed.