A new stage in the transformation of the La Défense esplanade is beginning. Paris La Défense unveils its ambitions through a spectacular greening project, fully participating in the reinforcement of the place of nature in the city pursued by the public establishment. Take a guided tour!

Following the implementation of several experimental sequences between 2017 and 2021, the overall urban project for the transformation of the esplanade is now unveiled. The roadmap set by Paris La Défense was to imagine a coherent and sustainable development of the public spaces of the esplanade, between the Agam and Takis basins, both on the surface and on the underside, all in conjunction with the inhabitants. With this in mind, Paris La Défense has entrusted the development of the park to the Michel Desvigne Paysagiste (MDP) group, whose preliminary project we are unveiling!

One of the largest parks on a slab in France 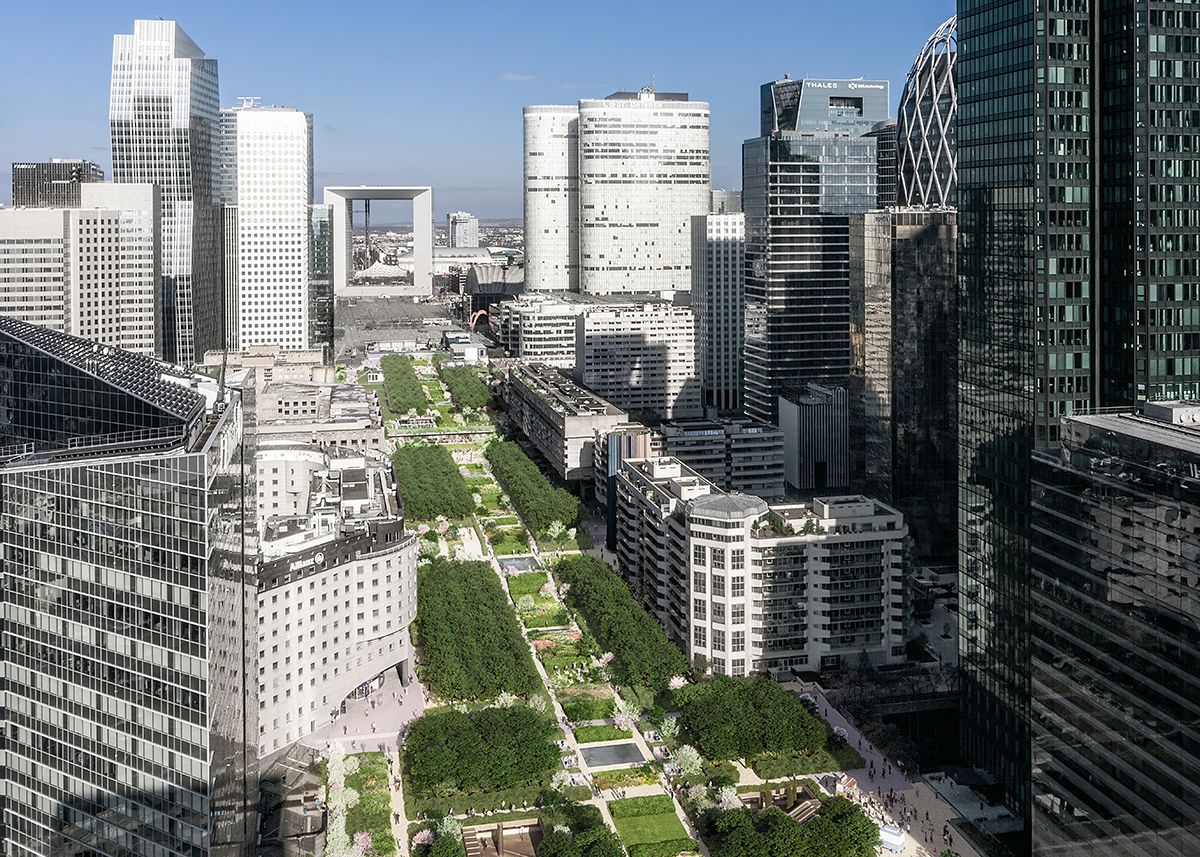 From a landscape point of view, the park project, imagined by the group, will have two faces. The first, classical, will extend the historical route of the axis created by André Le Nôtre (from the Tuileries Gardens to the business district). The second will adopt a bolder, more contemporary vocabulary, reflecting the visionary and innovative DNA that has always permeated the area.

The main principles of the Park are based on:

**Figures imposed by the developer
In addition to its environmental dimension, the Park project intends to respond to the evolution of different uses for more conviviality, sharing, nature, sports and leisure. But all within a framework set by the public establishment Paris La Défense:

These are ambitious objectives to achieve, but not without difficulties, since the esplanade rests on a slab located several meters above the natural ground. This implies the choice of tree species adapted to the particular climate of the district, but also according to the capacity of the slab to support their weight.

The study phase is currently underway to finalize this project, which involves many experts.

The Eole project, on which work began in 2016, aims to extend the RER E line by 55 kilometres to the west and to build a new station in the large cathedral under the CNIT. With a

One year after the selection of applications in the framework of the &quot;RD993 lab&quot; call for projects, the Hauts-de-Seine Department, in collaboration with Paris La Défense

Lead by Paris La Défense, the start of the works that will transform the Place de La Défense is imminent. This emblematic and vast space (20,000 sq. metres) has been totally redes

Paris La Défense is staying the course and continuing its mission to modernise and transform Europe's leading business district. The public establishment has just completed a seri