With the support of the Direction Régionale Interdépartementale de l'Alimentation, de l'Agriculture et de la Forêt d'Île-de-France (DRIAAF), and ADEME Île-de-France, the association carried out a diagnosis to take a first look at the figures for food waste and understand where employees' bad habits come from.

Launched in early summer 2018, this audit focuses on practices and quantities wasted in the company restaurants of five towers in the business district (Allianz One, Égée, Exaltis, CB21 and Grande Arche). Using a common methodology, the association measured, during two weighing campaigns, the quantities served to guests, those thrown away and those kept in the kitchen.

Between the two weighings, new actions to combat food waste were put in place and shared.

The conclusions of the work are gathered in a practical guide and action sheets, with a sharing of good practices and individual and collective solutions experimented.

A key figure? 16% of edible food is thrown away. Over the three days of the first weighing in the five rounds, 8.6 tonnes of food were prepared, of which 1.4 tonnes were wasted. The good news is that in 6 months of experimentation on the 5 rounds, we noticed a 23% decrease in food wastage.

Half of the waste is in the plates (at the return of the trays). On average over the five sites during the first weighing, 50% of the waste was found in the plates (food not consumed), the other half is not served, for example presented in self-service and cannot be re-proposed for reasons of hygiene. 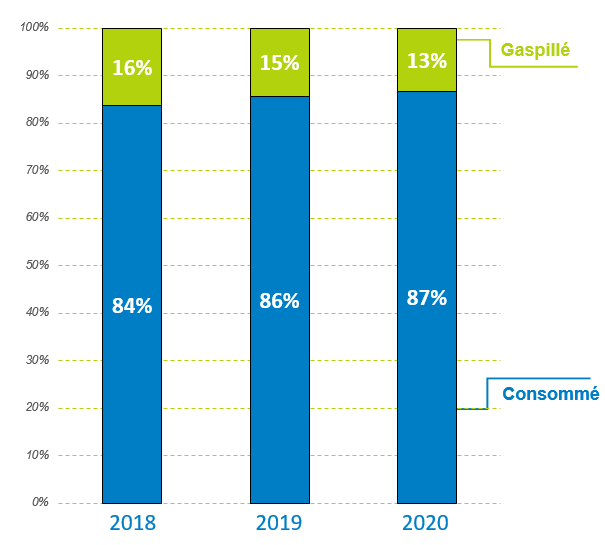 86 grams of food wasted may seem ridiculous, but on a territorial scale it represents 6 tons!

Study conditions and results
Measurements were taken on the quantities prepared for the guests (38.5 tonnes of food in total), those thrown away and those kept in the kitchen. Of the quantity of food wasted (5.05 tonnes), 54% (2.7 tonnes) represents food that is not served (presented in self-service, not taken by the guests and cannot be reused), and 46% (2.35 tonnes) comes from the return of trays (compared with 50% in 2019). A change in guest behaviour is therefore noticeable, with a decrease in the amount of waste generated when returning trays.

By extrapolation, it is estimated that the volume of a restaurant with 1,000 place settings/day amounts to an average of 21 tonnes of food wasted per year. On the scale of the Paris La Défense area, food wastage would therefore represent 6 tonnes per day, i.e. 1500 tonnes per year.

Teachings
The actions carried out since 2018 have proved their effectiveness! Bread being the most wasted commodity in 2018, modifying its distribution, charging for the second loaf of bread, reducing the weight of the bread or carrying out awareness-raising operations with the gachometer have borne fruit. Only the vegetable and starchy food component has increased since the second weighing campaign in 2019, and will require further efforts.